This week has been full of surprises at the cinema. First I saw Life  yesterday and was absolutely floor since I had zero expectations. Then today I saw Power Rangers and my expectations were almost in the toilet. Well I am thrilled to say that I thought Power Rangers was one hell of a ride. It was so much fun, dumb fun mind you but fun none the less. Also this film pretty much opens with a joke about jacking off a cow so yeah it goes with out saying this movie was going to be interesting on some level. 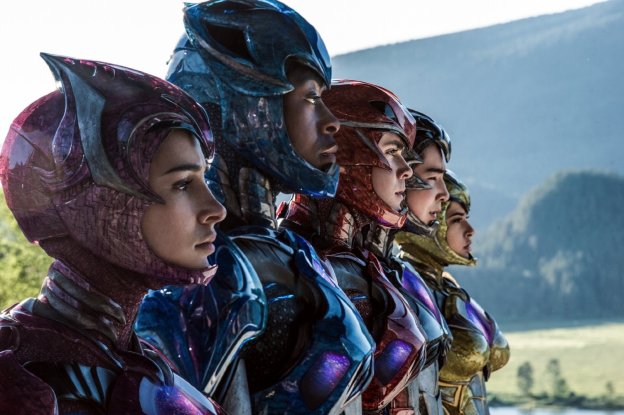 Like I said I had my expectations in the toilet for this film and was I ever shocked when this had some genuine character development. That was something I wasn’t expecting at all. Especially since all this movie needed were just people who were likable enough to get us through the “plot” and into the action. So when I saw the characters develop through out the film I was surprised. The character who I liked the most was Billy Cranston (Blue Ranger) played by RJ Cyler. The way the film progresses his character was really awesome, because in this film he is a character with autism. Dealing with something that in many ways is a sensitive subject could have ended up in the way of a disaster. It could have seemed like the intentions weren’t genuine and that they were simply doing it for the sake of doing it. However they handled it really well. Never once do they make it seem like you should feel sorry for him but rather that he sees the world differently and doesn’t understand certain things that are deemed normal like humor.

While for me Billy was by far the best and most well developed character, the rest of the team and a lot of the supporting cast were great as well. I was really happy to see that I didn’t hate the lead actor Dacre Montgomery as Jason Scott (Red Ranger), due to the marketing team insisting on using images of him where he look bored and bland. He proved to be an interesting character. In fact there were things about each Power Ranger that I found to be interesting. Sure some more than others but in the end it was really well rounded. I think a large part of what made this movie work for me was how great the chemistry was between the Rangers, because without that this whole thing falls apart. Also they all gave at minimum a good performance which was a relief. Bryan Cranston who is an alum from the original Mighty Morphing Power Ranger show from the 90’s and in this we plays Zordon which was a fun but surprisingly slightly emotional, slightly. Also Bill Hader as Alpha-5 was a nice touch. Once again a nice surprise. Noticing a theme in this review?

Now before moving away from characters on to other topics, I have to bring up Rita Repulsa played by Elizabeth Banks. She was pure ham here. I was shocked that she went so over the top after seeing how grounded and relatively serious the rest of the cast took this film. Banks was almost on the level of the original show with how insane she acted. It actually began to take me out of the movie at times. Although luckily she didn’t have that much screen time but when she did it was distracting compared to the rest of the film. It really brought things down for me unfortunately.

While on the topic on issues I had with the movie, now is a good a time as any to mention that there is some pretty bad CGI towards the end of the film. The only reason I noticed because the CGI had been so good up to that point and it was just so noticeably different. Though to be fair that is a minor gripe but I do feel it was worth mentioning since it caught me so off guard. It’s comparable to the weird CGI moments in Captain America Civil War just bizarre and noticeable. With that being said the CGI is nothing compared to the Krispy Kreme product placement in this movie. I can’t even begin to comprehend this. The name Krispy Kreme is said like thirty times throughout the entirety of the film. It’s insane. I can’t even go into why it’s brought up so much because that would be a spoiler. Yeah, it’s that integral to the plot. How insane is that? Pretty damn insane if you ask me. It’s so bad and just made me cringe every time it was mentioned. It’s worse than the product placement in Man of Steel which had the honor of having the worst product placement in any movie I had ever seen. It’s mind boggling.

Going back into things that I liked about this movie was the mature tone. It didn’t shy from making some more “adult” jokes and poking fun at itself. The biggest strength that this movie has aside from its characters is just how fun it is. There’s always something of interest happening. The suits were really great I loved the designs, they were really sweet. Much better than the originals that’s for sure. The last thing that I really liked about this was that it set up a sequel and a franchise without that being the primary focus. It told its story but also sprinkled in some seeds for a sequel and an entire franchise. I can’t wait to see what they do next because I really did enjoy this quite a bit. I was as I’ve said several times throughout this review: pleasantly surprised.

What are your thoughts on Power Rangers? Love it? Hate it? What do you hope to see in a potential sequel? Let me know by commenting here or by starting a conversation with me on twitter or instagram (@nerdycasual). Also while I have you thinking about social media why not share this with all of your friends who you think might be interested. I’d really appreciate it. Anyways thank you so much for reading and until next time, take care.