Before I begin the review I feel it’s important to address the elephant in the room. The main reason for my watching this film was because it was referenced directly in the new film Logan. Not on only that but Logan has been said to have drawn inspiration from this film. Also This year in 2017 I want to watch movies that I had never seen before that came out before I was born in 1997. So with that out of the way let’s talk about Shane.

Shane is easily one of the best westerns I have ever seen and that is largely because of the talent on screen. It has a great lead character in Alan Ladd’s title character Shane. He is the iconic gunslinger with a mysterious past, but with the performance to back up the now cliche archetype. It is the first performance I’ve seen from Ladd if my memory serves me correctly and it was a great first impression. The rest of the supporting cast is also great I loved the chemistry he had with the Starrett family. Despite just meeting them at the start of the film it feels like they’ve known each other for years. Van Heflin and Jean Arthur were great in their roles of Joe and Marian Starrett respectively. Lastly the Brandon De Wilde as Joey Starrett consistently brought a smile to my face through out the film with his high energy. Not mention that for a kid performance it was pretty damn good and in 1953 no less. I mean this kid was nominated for Best Supporting Actor at the Academy Awards. 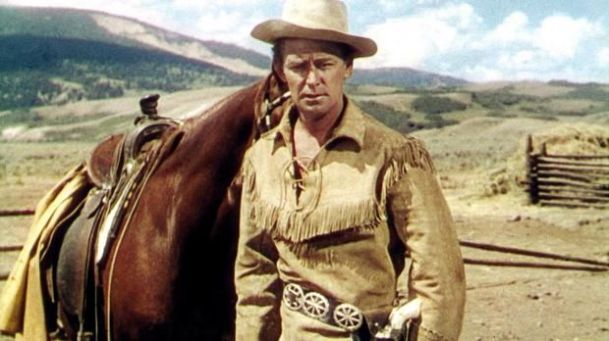 Speaking of the Academy Awards, Shane was nominated for a number of awards but only ended up leaving with Best Cinematography. Which it absolutely deserved because this film looks absolutely gorgeous, ever frame is a marvel of cinematic history. The locations that they shot were fantastic. On a technical level this film is really well done, great editing, sound design and masterful directing from George Stevens. This really intrigues me into going back into look at the rest of Stevens filmography. The film still holds up today, it is paced extremely well and that’s extremely impressive considering the time that this was made in. I am in shock that the film didn’t get nominated for it’s terrific musical score composed by Victor Young. Although to be fair I haven’t seen many other films from 1953 so I don’t really know what it was up against.

In the way of negatives I don’t have many, I do feel that there were some smaller characters who felt like they served no real purpose. Also there is a fight scene that I do feel drags on for about a minute too long. The way they could shoot fight scenes back then was too limited and it began to feel repetitive near the end of it and I feel that could have been tightened up a bit. Aside from that I don’t have much to complain about. Overall I was very impressed by the film and how well it manages to hold up today.

Have you guys seen Shane? Did the references to it in Logan make you interested in watching this film? What is your favorite western? Let me know by commenting here or by starting a conversation with me on twitter or instagram (@nerdycasual). Also do me a favor and share this review with your fellow film friends! I would really appreciate that. As always thank you so much for reading, take care.