The Marvel Netflix shows have been a bit of a mixed bag with audiences, especially as of late with the cancellation of Iron Fist and Luke Cage. However, there was still plenty of buzz and anticipation for the third season of Daredevil, which has up to this point been their most successful Marvel property. It has done well critically and has been embraced by fans as one of the best ongoing Marvel properties. This season marks the return of fan favorite Vincent D’onofrio as Wilson Fisk as the main antagonist who only briefly appeared in the second season of the series. Now two and a half years after the second season the third season has been released. Not only does this season meet the expectations that were set for it by many fans but also exceeds them.

The season immediately picks up with Matt Murdock moments after The Defenders concluded. The show gets a running start with a gorgeous visual that merely hints towards the excellence of this season. The place where Murdock is at is one that reminds audiences why this character is so interesting and entertaining. Having not only his body broken and battered but also his faith and his relationship with God. It’s a slow and interesting journey that the show takes Murdock in this season in terms of his faith and when it concludes it is immensely satisfying. However on the physical side of things Matt’s recovery happens far quicker than it could have been but it never feels rushed. There is a good sense of how long Matt was recovering for and is believable. 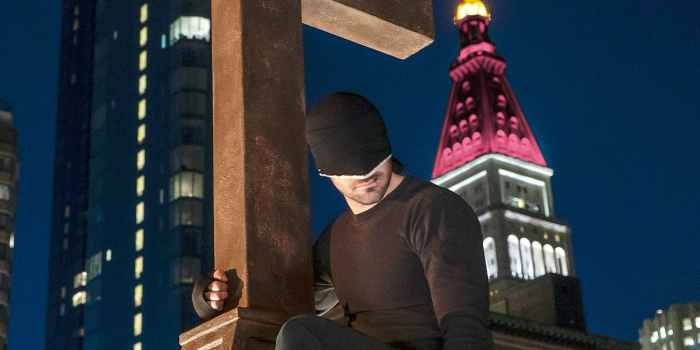 While on the topic of Murdock it is worth mentioning the incredibly powerful performance that Charlie Cox gives as this character. He is someone who has been beaten, battered and bloodied and it makes for some great character moments. Cox brings the emotional and moral journey Murdock goes through to life beautifully and this season solidifies him as some of the best casting in any comic book property. Cox isn’t the only actor to stand out with a brilliant performance but so does Deborah Ann Woll as Karen Page who had a lot of great moments this season. She gets her time to shine specifically in the episode entitled “Karen” which finally gives us insight into her backstory. There’s always the concern of revealing too much about a characters past and ruining the mystery but in this case it only further elevates this character. There is one more performance that is important to address in terms of the good guy characters (we’ll get into the villains later on) and that is Peter McRobbie as Father Paul Lantom. McRobbie had been great in the previous two seasons of the series but is a real stand out in season three. There are many moments where we see him reflect on the choices he made in the past and certain things that he kept hidden from Murdock. These moments while at times brief are really what gives this show heart and the series wouldn’t quite be the same without them. 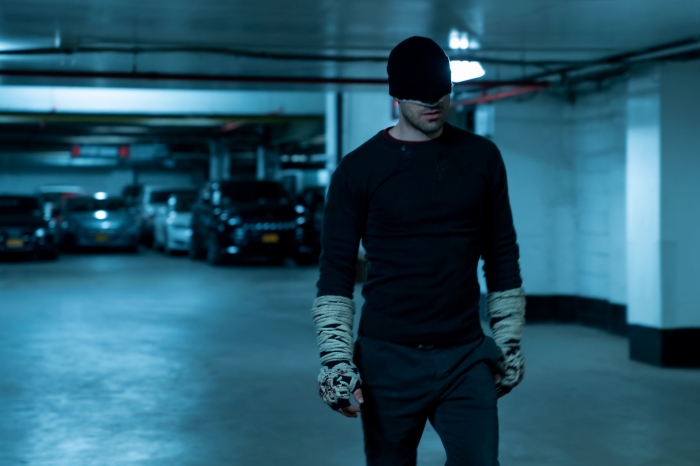 Speaking of great moments in this show in the past many of the stand out moments have been the incredible long take action sequences and action sequences in general. In season three they really took things to another level to impress upon the audience how much time and effort is put into this show. While the wait for this third season may have been long and at times excruciating it was all worth it and nothing highlights that better than the action sequences. The choreography was simply breath taking and has audiences on the edge of their seat to see what happens next. There is a true sense of danger for the hero part in parcel with the fact that they aren’t in any fancy armor but also because you feel every punch thrown, every face beaten in or every neck stabbed. That is how effect these moments are this season. There are so many great action beats in this season that are filled with genuine tension like the prison sequence, or the attack at the bulletin. While those two are great and are likely the standouts for most people there are two other worth mentioning. The first being the fight between Daredevil and Kingpin, which yes a lot of people are talking about but it definitely is the best fight and action in the season as far as this review is concerned. Lastly though is the freeway moment in episode twelve. There is genuine desperation, dread and tension all throughout this moment and it is never clear until it has concluded where it was going to go.

Another brilliant thing that this season does is it perfectly captures the tone, heart, themes and character of the comic books. This season loosely adapts the famous storyline Born Again absolutely nails what made that story so great here. It is really amazing to have something while standing on its own being so faithful to the source material and arguably the best adaption of any comic book property ever. Whether you’re talking movies, TV, novelizations or radio shows this is the best adaption. 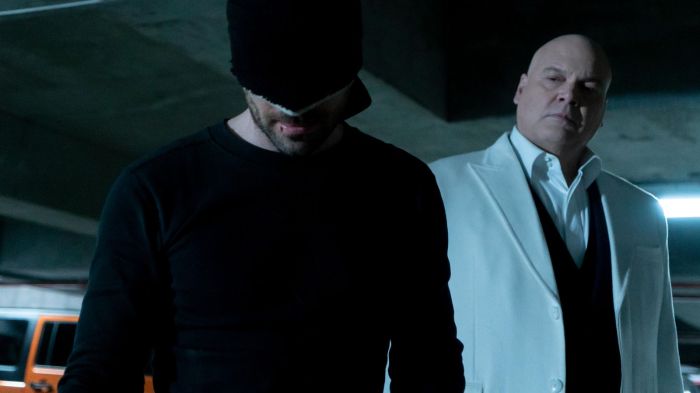 One of the aspects from the comics that was so wonderfully translated to the screen were the villains. Returning is D’onofrio as Wilson Fisk and the show finally transitions him into the persona of the Kingpin. The performance given here is a lot quieter than when he saw him in season one or briefly in season two. Make no mistake there are still big moments that make him so great but there is a quiet destruction to this character that is felt throughout the entire season. Fisk’s plan is so methodical and well written that it really sets a high standard for villains in comic book properties. D’onofrio so effortlessly owns this role and nothing makes that more apparently than his ability to at times make you sympathetic for this monster who is responsible for so many lives being ruined. Additionally his ability to manipulate characters like Ray Nadeem (more on him later) and Ben Poindexter are not only believable but also just plain horrific. The fall of Poindexter was one that takes its time to develop and is well worth it. When that character starts out he’s in a place that it is hard to see why he would fall but as things progressed and Fisk manipulated him it all made sense. Poindexter is similar to that in Harvey Dent in The Dark Knight. It’s heartbreaking, tragic but also exciting because if you know the comics you know about all of the potential that this character has. The backstory given to the character and the way that it is presented to the audience is clever and memorable. 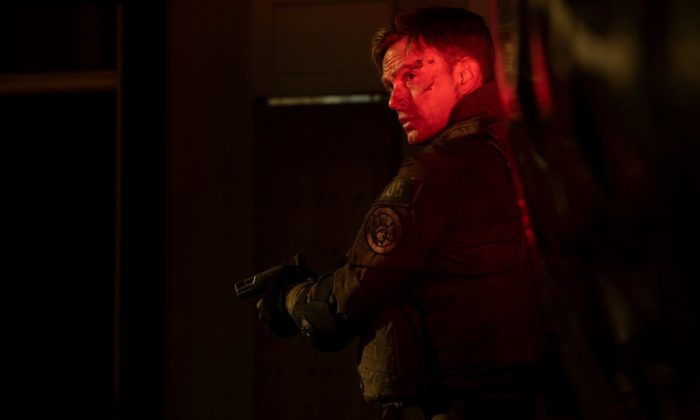 Now in this review the heroes and villains have been given their due and highlighted appropriately but this season there is a third component that is worth noting which is FBI Special Agent Ray Nadeem played by Jay Ali. This is a character who at first will have audiences scratching their heads as to why he is being given such attention and depth. As the season progresses Nadeem serves as a very interesting perspective, just a regular person, with regular problem, just trying to do the right thing in terms of their job and their family. He stands out for being a regular person caught up in a situation, which at times feels larger than life. The relationships he has with certain characters or develops later on in the season ring true to life and never feel superficial. The choices he makes based on the things he learns in the season make him an excellent and sympathetic character. His inclusion in this season was a welcome one and felt natural within this story. 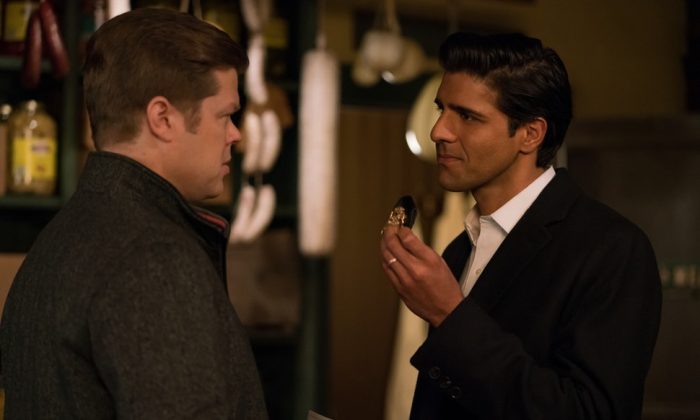 Before wrapping up this review there is a few more things worth addressing like the brilliant music composed by John Paesano. Paesano has been involved in the series from the very beginning but this season his work stands out front and center. His music elevates so many moments and feels so impactful. Paesano’s music really helped establish the grand scale story being told in this season and the season wouldn’t be nearly as effective without it. One other thing that needs to be addressed was the one real flaw in the season and that was the final shot. It was a bit much and a little cheesy and feels like it should have swapped places with the scene that preceded it. It’s a small issue sure but it literally is the final moment of the season and the thought of it does linger. Ultimately it is just a nitpick but still something worth mentioning.

Overall Netflix and Marvel absolutely crushed the third season of Daredevil. It is a nonstop thrill ride from beginning to end that beautifully captures what makes the comics so great. It absolutely lives up to the hype and is the most satisfying season of television since the final season of Breaking Bad. If you haven’t seen Daredevil season three or otherwise that is definitely something you should consider changing. If you have though I would love to know your thoughts not only on the show but also on this review. Thanks for taking the time to make my thoughts and opinions a part of your day.